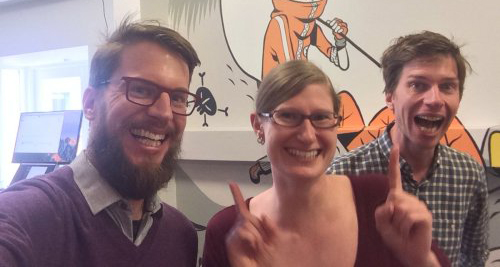 I noticed that it had been a wee while since a post was made, so I thought I would say hello and give you all an update.

Hey everyone! I’m Navi, the newest member of Dinosaur Polo Club. I’m here to help out with Production, Customer Service, QA, some game development, and what ever else comes up. I was born and raised in Vancouver, Canada. After several years of university education, I spent six years teaching primary school to some of the most lovely children I know. Eventually, I decided it was time for an adventure, and I wandered to Toronto for a while before landing in Wellington. After meeting the amazing dev communities in all three cities, I decided it was time to change up my career and work toward becoming a Producer at a Game Studio. I began my dev journey in QA with the lovely people at PikPok. I learned a ton about the process of how games are made, and worked on several titles in various stages of development and release. When I discovered that Dinosaur Polo Club was looking for a Producer, I thought I’d give it a shot, and now I’m here! My life is not all just fun and games *groan*, I like to ref roller derby, swing/tap dance, knit, sample a variety of beers, wines, whiskeys, and cheeses, and, of course, play games (both video games and tabletop). But that’s enough about me.

What’s new with the game?

After many hopeful requests from our community, endless mode is coming to mobile! Robert and Peter are having a good look at how to make some improvements to the existing endless mode on the Steam version of the game and will be releasing the finished product to all versions.

We are also looking into a persistent pathfinding bug that is causing our passengers to skip their trains. We don’t have a fixed date for when this fix will be out, but it’s in the works. *cross our hearts*