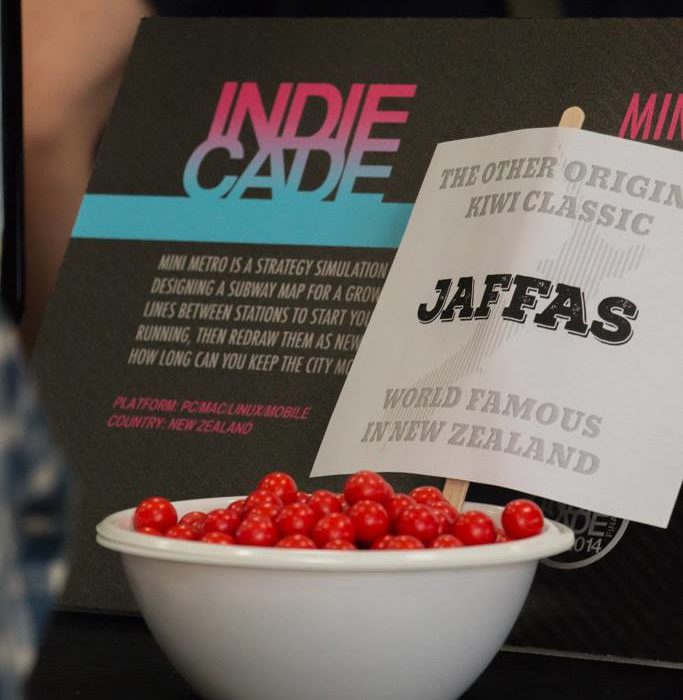 We’re back! As expected IndieCade was hectic and fun and busy and over in a flash.

Showing Mini Metro as a finalist at IndieCade this year was a real honour for us. It was humbling looking at the other finalist games—Ether One, for example, a game exploring dementia, and How Do You Do It, and Service and Use of Force. I felt like Mini Metro was definitely one of the more ‘ordinary’, game-like finalists.

Attending an event such as IndieCade is a reminder of just how tiny and isolated the development community in New Zealand is. For us it’s so rare to see and meet indie devs who’ve worked on games we know and have played and love. I’d be lying if I said it wasn’t also a bit of a thrill (speaking just for myself here of course). We met John Lindvay who interviewed us a few months ago on BigSushi.fm. I finally met Andrei Marks (and played a lot of Elbow Room) after being Twitterfriends for months. We met Willy Chyr of Relativity fame (cool guy!), and even had a brief, awkward conversation with Adriel Wallick about candy. Next to us in the Fire Station was Joshua Boggs, showing FRAMED. We talked to so many interesting developers!

The internet is of course terrific at breaking down the tyranny of distance and allows us to develop and market videogames from all corners of the globe. In such an environment it’s easy to forget that there’s still a lot to be gained from meatspace.

As ridiculous as it sounds, demoing the game in the Fire Station was the first time we’d ever done any serious playtesting. We learnt a lot about how new players learn the game. We saw which rules confuse people the most, which concepts are inscrutable, and which interactions are never clearly grasped.

It’s not the ideal way to conduct playtesting, as the vast majority of players will not have the developers of the game watching over their shoulder as they learn to play. 🙂 As we only had the game playable on one computer, most people only played a single game. This meant we didn’t get a chance to see how players fared in their second, third, and subsequent games. Still, it’s given us a good idea on what we can improve about the experience new players have, and how we can better guide them through the rules.

The costs for the three of us attending IndieCade were as follows:

Luckily Robert and I have an aunt and uncle* in LA, about 30 minutes drive from Culver City, so we had free accommodation and even got to borrow their HDMI monitor for the weekend (thanks Roger and Lindy!).

Obviously the big expense there is the flights. New Zealand is a looooong way away from any of the big videogame industry hubs (though not as far away as other places). That flight will always come up as an issue for indies in this part of the world.

IndieCade was a great first event for us to attend and exhibit Mini Metro. The organisers and volunteers were great to deal with, and the attendees were friendly and plain happy to be there. We could fly direct to LA from New Zealand, and even fluked free room and board. As IndieCade is a curated festival, the nominated developers aren’t charged. And, especially compared to what we heard about other expos, the Fire Station hours weren’t taxing; a brief press event on Friday, 10 – 6 on Saturday, 10 – 5 on Sunday.

As I said earlier, it was an honour to have been nominated for IndieCade. The festival feels more relevant than ever, especially given the events of the past two months. That exact phrase popped up a lot throughout the weekend—the events of the past two months. It’s wonderful to see a loving celebration of the growing diversity of videogames, not just in theme but also in form. It’s an important festival. I don’t know if anything else is celebrating the maturation of the medium quite like IndieCade.

Thanks to Jamie Churchman (Mini Metro’s graphic designer) for the photos. You can check out the entire gallery on Facebook.

* Roger is our father’s cousin, so technically he’s our first cousin once removed, but uncle does the trick.